Write from the Start 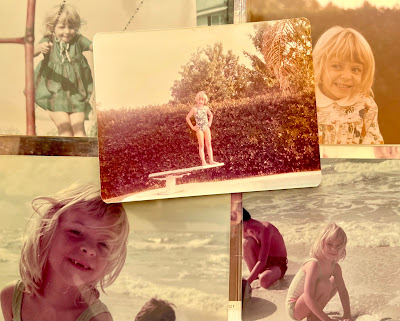 Like many little kids, I had an imaginary friend.

Mine was a girl.

I had three older brothers, boy neighbors, boy cousins, and classes at school filled with boys. There were few girls that I could play with, so I invented one.

Don't get me wrong. I loved running through the hedges playing hide and seek, spending hours in the pool holding my breath, ambushing people with my suction cup bow and arrows, and laughing when one of my older brothers hijacked my Barbie plane with his G.I. Joes and kidnapped Ken.  Though it was definitely not funny when he shrank Ken's head in my pink EasyBake Oven--the head always wobbled on the doll's neck after that, but...

Was it too much to ask to relate to another girl?

Yes, it was. This wasn't the time of high-speed internet where you could connect with others (even as an observer). Instead, there were landlines tied up by talkative moms and dads who were just discovering the joy of the T.V. remote, preferring it to the Backgammon game his kid (me) kept pestering him with.

So...I invented an imaginary girl to tell all my secrets to and play all the girly games I wanted to play. She was my first captive audience. And, I guess that's where all my stories started.

She didn't have a name, and I had no idea what she looked like, but she was always there. Of course, if I had recognized that she was me, I might have been less excited about sharing stories of a dysfunctional family of green jello who dressed in Hawaiian shirts or the time that Donny and Marie Osmond lived in the treehouse in my backyard and I listened to them argue while swinging from a tire swing. She even helped me recreate the scene at the end of Grease, where I performed as both Danny and Sandy (albeit in front of my canopy bed lined end to end with dolls and stuffed toys). Damn, I was proud of that dance! And prouder still of mom and dad's expressions when I made them watch it. Twice.

I didn't write down those early stories--I was more likely to put crayon to paper than pen--but told them in an endless series of narrations. It's a wonder my parents could put up with my chattering, but then again, my mom was a chatterer, too. If you were looking for a Barbie soap opera, my house was the place to be.

I discovered my love for creative writing (versus creative telling) in 5th grade. We had a guest teacher come in (guilt tugs, I can't remember her name) and challenge us with a series of prompts. The first one? Write down the steps to make a peanut butter and jelly sandwich. It was clear from that exercise, technical writing would never be in my future, but the second assignment? It hooked me, pulling everything I am up into that writing boat and setting sail.

Animate an object--any object.  Really? Anything? Okay, burping garbage cans it is. (I did hang out with a bunch of boys, remember?) It was really a cinderella story about a beaten-up metal garbage can that turned into the fancy dark green plastic one my mom and dad had replaced it with. Yes, there was a fairy garbage-mother, and instead of shining twinkles from a wand, burps came from underneath a lid. It was a hit at school--one of only two stories to be read in front of the class. My biggest worry on the day I had to read my story? Whether I'd get the burps right!

Thinking back to those early years, I realize just how much I have evolved since then...but that imaginary girl? She's still spinning off-the-wall stories...